In my mind the hero does not always win. Quite rarely, in fact. My mind is a black place. It seems to have an affinity for darkness. It finds the bad in-spite of my seeking the good. I suppose that is because I have seen with my own eyes the nefarious nature of this world. The darkness. I have looked upon it with repetition. Christ, I have even held it within my hands… I have seen the things that you lock your doors for. I have even been locked in a box with them. I have stared into the eyes of a murderer; a truly foul gaze to behold. I don’t know why, but their eyes just look different. It is a truly confronting thing, having to look at a person like that and show kindness, empathy and dignity, knowing they care nothing for your life nor the life they have taken. I always thought that this is what it would be like to have dinner with the Devil; being force fed bites of trauma while staring across at something truly reprehensible, and yet not being able to get up and leave. Even if you tried, the pernicious gape of the wicked attaches itself to your skin. A ghastly thought in the most fucked up of ways, isn’t it?

As a paramedic, my job was to respond to anything and everything with skill and precision, not judgement nor bias. The longer you are in the job the better you become at simply ‘doing’ and swallowing the feelings of it all. Sometimes it is even necessary in order to be able to continue. On the scene of an emergency there are two groups of people: Those watching, and those doing. The watchers gawk and film or turn away. The doers (first responders) are steeped within the chaos. Kneeling on the broken glass, blood, tissue and death. They are no less effected by what’s going on, they just simply choose other’s over themselves. Ignoring the nagging emotion of it all. We swallow the pain in hopes that we can deal with it later. Thing is, there is always another call waiting… another man down… another place to be. So, it stays buried. Unwittingly festering within the healer. A poison that seeps within a well intended mind. An inking of pain to the soul. Eventually, memories of trauma force themselves upon you, much like the sinister gaze from the Devil.

I was excited to go to bed tonight. I was tired and ready for rest. I had done laundry and washed my bedding so my sheets and pillows all mimicked a spring time scent with accompanying softness. A serene juxtaposition with what was about to happen to me…

I lay my head on the pillow and began to breathe deeply. I could feel that slight euphoric daze wash over me as I drifted off to sleep. It felt like only a moment, but the burning of my muscles and the numbers of my clock would tell me otherwise. I had fallen asleep for some time, but my mind had gone elsewhere – somewhere I wish it hadn’t…

Suddenly, I was sat within a familiar scene in the passenger side of the ambulance. It was the middle of the night and we were approaching a phosphorescence of red, blue and white emergency lights. The strobing glow beat back the night for seconds at a time.  The police had called us to check on a subject that had just been arrested. When I say he had been arrested, I mean he had been arrested hard; he was bitten by the police K9 officer’s dog. As I disembarked from the ambulance and approached the nictation of lights I could see that I was being frantically waved over to an area lined with police officers. As I got closer I could hear the ruction between the handcuffed subject and two other officers. Though he had been badly bitten, he remained defiant and vial towards those around him. With each protest from the man, a deep baritone of wails could be felt shaking against your chest. Had this been a scene from a movie, he would have likely transitioned into a werewolf by now. But this was not a movie. This was real. And he was possessed by a limitless ferocity. 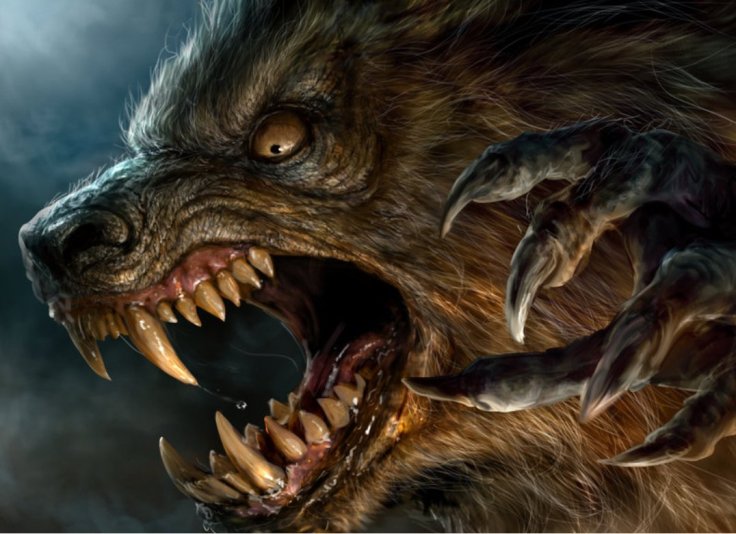 The back of his arm above the elbow had obviously been the target of choice for the K9, bits of fatty-tissue and flesh hurled about in opposing directions as the man lamented against the police officers. I shined my light down towards the feet and could see that he was literally standing in a growing sanguineous puddle of himself. It was at that moment that the light caught his attention and he looked over at me, ceasing for only a moment his angry pleas for violence – his eyes were as black as the night that surrounded us. They looked like demon eyes. Soulless. Completely demonic. This is how they looked on that day and this is how they looked in my dream.

The dream cut out bits of the call and we were now in the back of the ambulance where I was trying to clean and dress this man’s horrendous wound. It was in the ambulance that I would learn that this man had been attempting to take a woman’s car and when she refused he used brute force and took it from her. He did not make it very far as the event was witnessed by a cop that the man had not seen across the street. He fled on foot and was then tracked down with the assistance of the K9 dog. It was said that he was punching the dog as the dog tore into the flesh of his other arm. I did not like this man. Which is fine, because he did not seem to harbor any feelings of affection for us, either.

Though he was handcuffed he was still vigorously fighting with us. He was bleeding profusely, and I was doing my best to wrap gauze around this jagged laceration, but with his uncooperative dance as well as the contortion of his arms from the handcuffs, it made the task rather burdensome. During the verbal exchange he told us that he had AIDS and that we were ‘gonna join him’ – “welcome to my AIDS nightmare, motherfucker!” It was at this time that I noticed blood all over my forearms and wrists. I had no open wounds so that was fine, but still less than desirable.

In real life when this was happening, I began assertively telling the man to hold still so that I could bandage his arm properly, he did not care. Eventually the back of the ambulance became nothing more than a battle ground of us versus him. He chose to spit, kick, bite and writhe against us. At one point he lurched away from the grasp of one of the officers, tossing his upper body towards me like a venomous cobra. Only the seatbelts of the stretcher held him to limited range. He was now growling and snarling at me while piercing me with his black angry eyes. 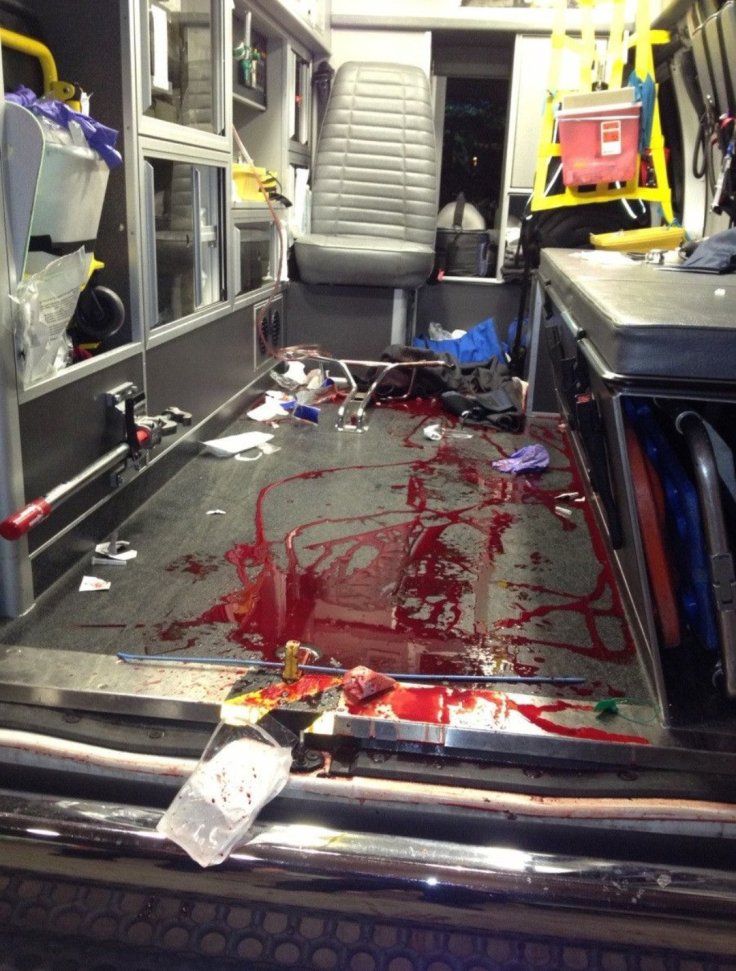 While dreaming my mind decided to hold onto that exchange and repeat it with increasing ferocity. Soon my body was coursing with adrenaline and I was readying to fight. My brain was telling me to survive. My body was now the one lurching and writhing. It contorted to the point of waking me from my sleep and as my eyes opened I was returned to the real world and the land of the here and now. My fear did not diminish however, it seemingly became more prevalent – there was a flickering tapestry of lights intruding in from the window; red, blue and white emergency lights. I knew I was awake but how the fuck was I still seeing the lights? I was now on the floor, using my hands and feet to crabwalk backwards away from the window, but the lights remained. I blinked hard a few times and to my dismay, the lights remained… I felt myself begin to scream. A scream of deep baritone. I sounded like a fucking monster… I felt as though I was trapped in hell. Surely, I am awake, how can this be happening? Why can I still see the lights? The red, blue and white lights permeated through my blinds and into my apartment, filling me to capacity with fear. I soon began having thoughts that the man had escaped and was behind me. I spun around and climbed to my feet and adopted a fighting posture, waiting for a potential showdown. The showdown would not happen, but reality would cement itself imperturbably into my consciousness; I could still see the gleaming flicker of red, blue and white lights because in actuality there was a police cruiser parked outside my window, conducting what I presume to be a traffic stop. The lights were real. I felt a sudden relief amidst the fear. I was truly beginning to come back home to the here and now. But fuck me, what a deplorable way to be awoken.

Picture that for a moment: A grown man of 200 pounds flailing to the point of muscle burn, and then succumbing to gravity and fear and ending up on the floor within his apartment. It really was two worlds colliding. But that’s how it was. That’s how it often is and it is how I am woken more often than not. I was sweating, near sobbing, frightened beyond belief and alone. Horribly alone. The closest thing I had to company was the remnants of memory of a man who wanted nothing more than to see me bleed. His voice still growled deeply within my ear. I can still hear his malevolent baritone even now as I type this. 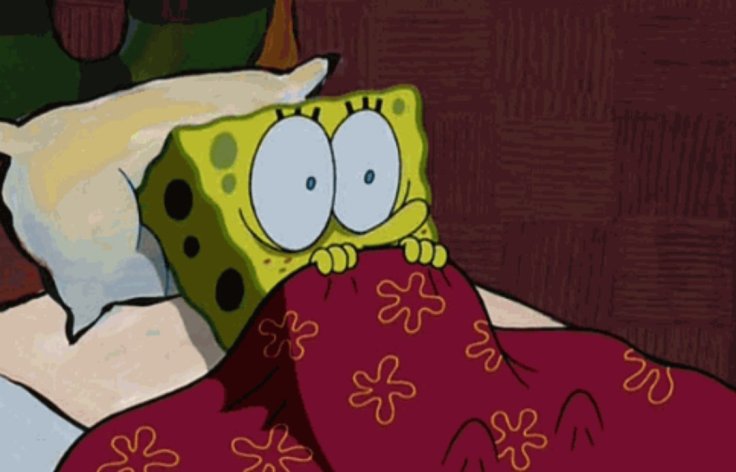 That’s PTSD; it does not give a fuck about spring time freshness of linens. It cares not for one’s desire to rest. It’s like dining with the Devil – no matter how much you want to leave the table, you can’t… you are forced to feast on the memories of trauma. Only you don’t bite into it, it gnaws into you.

Now every dark corner of my apartment reminds me of his eyes. Every creak and crack, makes my spine shorten and spasm. It’s going to be one of those days I guess; a day with not a lot of rest. I hate my mind. I hate how the good guy never seems to win. Oh well, at least the lights have stopped. And the monster is gone… for now…

(I heard this song later in the day… it seems perfect for what I was feeling).