Have you ever been so angry that your body didn’t know what to do? Stuck within a limbo of indecision and directionless thought? On that day, I was all of those things. The fibers of my muscles twitched and spasmed as if to be rioting beneath my skin. I could hear my own pulse slithering inside.

On July 6th of 2008, Colin Wilmot was killed by a faceless enemy that hid among the infinite expanse of a desert ravaged by war. I was some 10,208km away when I learned of this great travesty. And now, I was boiling within myself, stood in the presence of absolute apathy. I was in my girlfriend’s family kitchen. They all gawked at me with stupefied eyeballs. They could no doubt see that I was crumbling. A voice that has since become shrill and cold in memory broke in and tried to talk to me, the voice of my girlfriend;

“Wilmot’s dead. Colin’s, Colin is…” I never finished my sentence. My tongue was too weary. In a life hallmarked by confusion, abuse and loss, I have been gifted the juxtaposing privilege of knowing great men. Befriending them and melding with them to become family anew. Colin was my brother. He was a friend in the truest form. And on that awful, piteous July day, he was robbed from us, from me. I stopped talking because no matter what I said, no matter what words fell forth, none of this would make sense… I know that because it still doesn’t…

The calendar informs me that it’s been 11-years. Each cyclical blink of my eyes tells me that it was just yesterday. Both are true, true for a man with a broken mind.

You may find yourself pondering as to what it was that made Colin so special, and that’s fine. That’s a normal thought to have. Thing is, I possess neither the lexicological talents nor the time required to inform you of such reasons. But I can toss to you a few anecdotal testimonials.

I did not learn or sit behind the wheel of a car until I had joined the army. And when that took place—I was 24-years-old. The first vehicle burdened by my inexperience and trepidation, was a military grade army ambulance. To say that the learning curve was steep would be a sad understatement. I was terrified and clumsy. What most people learn to do as teenagers, I was undertaking for the first time in my mid-twenties. I was also doing this while surrounded by my peers, the people who needed to trust me with their lives, and there I was; a newborn calf, struggling to parallel park. Not a good look.

Colin was on my driving course. One night, we all snuck from the shacks and traipsed over to the local brewhouse. We partook in far too many beverages and shouted stories at one another from around the table. At one point, Colin leaned over to me, he placed his hand on my shoulder and spoke earnestly with me.

“Henny, you did good today—driving”.

He looked me right in the eye when he said this. It was in that moment that I knew Colin had the ability to lie in the nicest ways possible… But it was the sentiment behind it all. His reassurance was completely unsolicited and heavily welcomed. For the duration of my driving course, I felt like a fool. Out of place and stupid. But Colin refused to let me wallow in that. In fact, every time he had an inclination that I was introspectively berating myself, he would somehow magically appear next to me, and would begin orating heaps of compliments and niceties.

As time went on and my skills sharpened themselves, Colin and I found ourselves in the same vehicle while on a long trek to some rural town in Alberta on the last phase of our course. I was behind the wheel, concentrating on getting us to where we needed to go. Colin was in the back and as per, an unexpected Colin compliment shot up to the front of the jeep.

“Henny, you don’t have your civilian driver’s license, do you?”

“Well, you’re a damn good little driver! A natural. You, my friend, can borrow my car when we get back and go get yourself a licence!”

“Henny, you can use my car anytime, brother”.

My own blood brother was disquieted of ever even thinking of letting me behind the wheel of his car, let alone offering it up for a test! Colin was serious, too, he asked me about it a few times over the following months. I never did take him up on the offer, though in retrospect, I wish I had. It would likely have meant some more time together.

Then, there was the day on the bus. I had just finished a horrendous verbal exchange with my girlfriend over the fact that I was leaving home again, this time, for a training exercise. The fact that I had no say in the matter over these things did little to dissuade her vexation towards me. She seemingly had little to no patience or understanding on the demands of me from the army. But Colin did. He made sure to sit next to me on the bus ride to wherever it was they were shipping us off to.

“Henny, I know you’re catching shit from your girl. But, dude, you’re not doing anything wrong! She is being totally unfair, brother. She knew you were a soldier when she met you, right?”

“Well, this is what soldiers do! This is why they call it a sacrifice. We all miss our loved ones, everyone on this bus does—but not everyone has a girl making them feel as though they should feel bad for it. Here what I’m saying, Henny?”

“Yeah, brother. I do. It’s just, even her dad called me selfish…”

“Well, there’s nothing selfish about serving your country. This is training preparing us for war, man. You’d think she and her family would want you to be as prepared as possible considering what it’s like over there… right?”

“It’s just nothin’! You’re not doing anything wrong! You’ll be able to tell your grandkids stories of how you defended Canada one day, there’s nothing selfish in that, brother. Put your head down, get some rest… I’ll see you in the field, bro”.

Colin always made time for me. He always went out of his way to make sure that no matter how shitty I was feeling or being made to feel, that I knew I was doing good things. He would always compliment me. When we would get together and tip back some long necks, he would quiz me on medical protocols. And when all was said and done, his hand would always land on my shoulder and he would say:

It’s hard sometimes, to fight against the creeping sadness of it all when hearing the ghostly echoes of his kind words, knowing that they are all I have left of a man I once called, brother. I miss him.

My best friend, Drew, was in town this past weekend. We traveled to Niagara Falls; Drew had never seen that wonderment before. On our way to view the Falls, Colin was with us. In spirit, anyways. I spoke of Colin as we walked. Drew is my best friend in life, When I first met Colin after leaving home to join the army, he reminded me of Drew. A man of goofy wit and pure intentions. A man who could melt bad days with a simple smile and a corny joke. In a brief, ephemeral, introspective fable, I wondered what it would be like to have had the honourable chance to introduce the two of them. Would they see greatness within one another? Would they finally realize how special they both are? I dunno… But I’d like to think so.

Each passing year, I make it my mission to tell the world of this man. One of the greatest I’ve ever known. A man I miss, indescribably so. I do this in hopes of keeping him alive for just a little longer. Keeping that spark that accompanied his essence gleaming for one more day. The world could use a little more Colin. 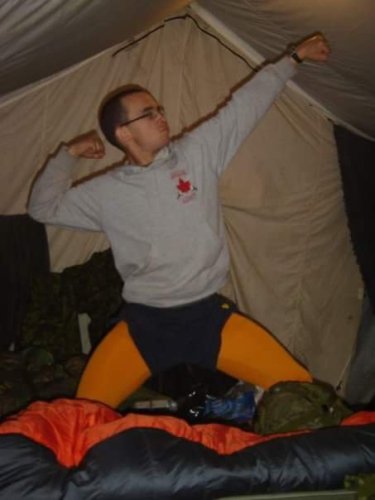 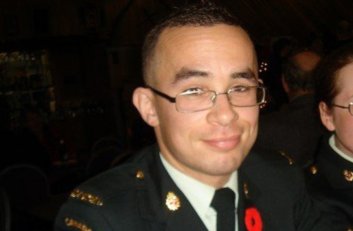 This will mark the first year that I am embarking on that mission sober. It will stand as the first sober July in 11-years. It also feels as though this is the first time that I am doing it the right way. Instead of drinking the pain away and trying to numb myself into tomorrow, I am feeling it. All of it. The good, the bad, the ugly. But mostly, I am just thinking of how gloriously fortunate I am to have known such a brilliant young man.

I am alive today because of him. I have freedom and safety because of his selfless service. And most of all, I have something priceless and everlasting—memories—memories of time spent with greatness. Times where I was truly happy. Times where I felt the bond of what family can be. He even nudged at the stone of confidence within me. A stone that has since been buried. But at least I know it’s there… Thanks to a man I once called, Brother.

I look to the horizon for you, my friend. I dream that you are somewhere peaceful, somewhere warm and carefree. I also dream that I will see you again. I don’t know when that will be nor how long it may take, but that dream is alive within me, brother.

Rest now, we have the watch.