The stand off was intense, unforgiving and prolonged. If there was an ambient soundtrack to this scene, it would certainly have been from an old western.

To my right, Drew, my best and most loyal friend. And directly in-front of us, a quarrelsome duo; Toby and Brad. I stared through squinted gaze and heavy brow towards the pair of ruffians that stood like statues. All four of us, barely moving, yet one-provoked twitch away from action.

“I’m gonna bash your fuckin face in!” Brad snarled angrily. I guess he didn’t like the mom joke…?

“Some time this year, or…?” It’s not that I wanted to have my face punched in, and trust me, Brad could likely do it. It’s just that when it comes to being challenged by a threatening foe, my mouth does not know when to shut up! So, quick quips tend to just fall from my lips.

We were all standing on either side of the mailbox that sat at the end of my block. Drew and I had been on our way to go for a walkabout town when Brad and Toby spotted us as they were meandering on through. The two aforementioned goons were the school bullies. By the age of 16, I was well versed in the school of Thugatry that both Brad and Toby held masters in.

From grade six until now, Brad and his lackey, Toby, had each taken turns tormenting my waking hours while at school. I had my drink tray tipped over, paper spit-balls stapled to my neck, dodge balls thrown like cannon rounds towards my head in gym class and even small rocks tossed at me during my treks home after class. Drew didn’t catch it quite as bad, but he had his share of run-ins with the pair. 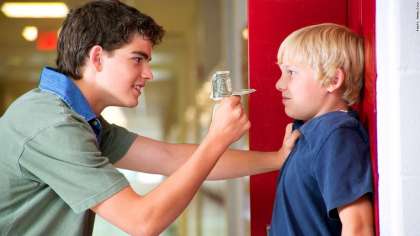 Now, here we stood, 16-years old in the middle of a hot July day, face-to-face with one another at the end of my street. I had held hope that I would not see either of their stupid faces until the start of school in the Fall, but that turned out not to be the case. Something was different on this day, though. I was not at all intimidated. Truth be told, I’m not sure that I ever really was. My lack of pushback was born from a deeply held belief that I was unworthy of doing so. I had little to no confidence growing up. What I did have was: Drew. He stood right next to me, ready and willing to punch this thing out. In retrospect, it was likely Drew’s willingness to stick by me that ignited any ember of self-worth within me that day. As such, I too, was ready to punch this thing out.

“Enough talkin. You know you’re a pussy, why don’t you just kiss my shoes, be done with it?” Toby squawked loudly while looking right at me.

“Well, Toby, I would, but it looks like your mom shops at Baby Gap. What are those, toddler size? Sorry about your dick…” I rebuked with a growing grin revealing itself along my face. At that age, it was believed that shoe size was directly linked to the admeasurement of ones… well… you know…

A wave of bemusement crushed the bravado that once emanated from Toby’s awkward face. It was quickly replaced by scorned anger after he and Brad had looked at one another as well as down at his shoes. When his eyes ascended from feet to eye level, he locked gaze with me and lurched forward. By this time, I had already placed a rigid amount of tension in my right arm and hand. I was ready to lob a balled fist of fury in the direction of Toby. I felt my skinny, undeveloped, adolescent arm propel through the air. It likely resembled that of an overcooked spaghetti noodle that had been draped over an oscillating desk fan. None the less, I hurled it all the same. I felt the wind brush along my skin as I threw the first punch of the ensuing rumble.

Drew and Brad also locked horns and had engaged in the glorious field of battle. I watched as my fist came into view and collided with the left cheek and jaw of Toby. His eyes clenched tightly. I heard the sound of flesh, bone and meat come together in violent embrace. I tossed a quick glance over towards Drew to see if he was in need of my squiggly-armed assistance. He was doing just fine. He too had knocked Brad back with a wallop of his own.

To my surprise, well, likely everyone’s surprise, the scuffle ended almost immediately after only two punches had been thrown. Toby stood back and looked at me with quizzical eyes as well as a developing bruise. Nicely done, noodle arms!

Brad was also a few steps back from Drew, next to Toby, and he too stood saturated beneath a heft of befuddlement. The stand off resumed.

“You’re lucky I don’t beat your ass!” Toby said through his teeth.

“Beat my ass? Beat me? Bro, I just smacked you around worse than a pecker on prom night! Besides, I’m standing right here, cowboy. Make your move.” I really hoped that he wouldn’t make a move.

“Nah, we’ll see you in school, boys…” After their thinly veiled utterance, both Toby and Brad turned and walked away. Just like that, my first official fight had ended. I gotta tell you, it was more confusing than it was invigorating.

Drew and I remained at the mailbox for a moment or two longer, likely processing what it was that just went down. I knew one thing: I was grateful to have him on my wing.

Drew and I did go for a walk. We didn’t say much to one another as we stayed steeped in contemplation. Eventually, after having procured a Pepsi and some All-Dressed chips, we traipsed along towards the wharf. We sat on one of the tottery old benches that overlooked the water and one chip after the other, continued to process the mayhem of moments ago. 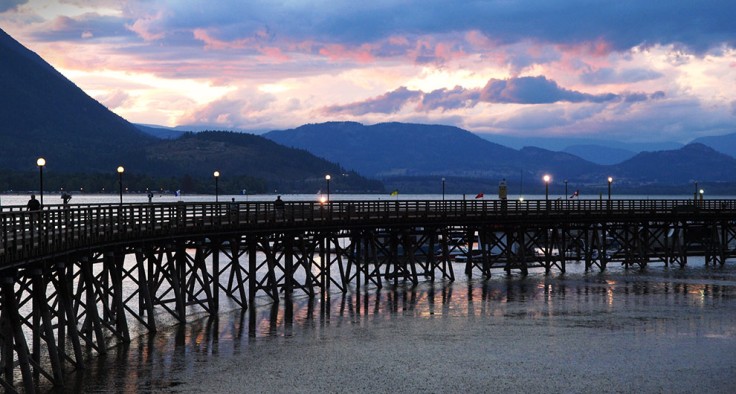 Drew turns his head and looks at me.

“We just got into a fight. Our first fight. Dude, we fuckin won, too! WE GOT INTO A FUCKIN RUMBLE!!!” My hand was stinging, but my smile was soaring as I spoke.

Drew and I held out each of our hands alongside one another’s and examined the redness and bruising that told the tale of battle.

For a kid with no confidence, in that moment, on that hot July day, I was ten-feet tall and bullet proof.

That scrap was the story of the summer. Each time it was recited to our core group of friends, the details became evermore fantastical and violent. I look back on it now, and it feels like the Greasers versus the Preps. Whoever could have imagined that I would look back and reminisce on a fight so fondly…?

20-years later, Drew came to Toronto, where I now live. He came for a visit. And on a warm July day at the corner of College and University Ave, we found ourselves once again, shoulder to shoulder, in a prolonged, unforgiving and intense stand off… but that’s a story for another day.