My mum fancied herself a lawyer. No, she didn’t have a crush on one… she quite literally felt as though she was one.

Years of comprehensive observation of such litigious T.V. classics as: Law & Order S.V.U., Chuck Norris’s Walker Texas Ranger and CSI: (wherever the hell they are this time), meant that whenever my dear mum vociferated at the television during the climax, she did so with what she perceived to be authentic legal argot!

“Go on, charge the bastard! He did it… You’re gonna rot, mate, you are… Get him, Chucky baby… Thought you’d get away with it, didn’t ya…? Oh, you bloody coward…” and so it went.

My mother’s idioms were as entertaining as they were loud, and she had yelled them with enough iterance over the years that these hastily worded proclamations had now become true to her… the law of Joan!

The other night, I was playing an online game with my brother. It is a game set in the late 1800’s and allows you to live out your wild west cowboy fantasies by controlling an avatar in the game’s open world. It is quite literally the closest thing to being an outlaw in the days of old that one can get.

My brother—who lives out west—and I use this medium as a way to have some fun, and stay in touch. Videogames are something that my brother and I have always bonded over.

In this online game, while living out one’s dusty-trailed dream, you can encounter computer characters that refuse to bend to your wicked ways and thusly run to report your crimes to the online sheriff’s. This can be quite vexing as it often leads to a truculent affair involving one heck of a shoot-em-up!

“Shit! Someone saw me… gotta kill him!” I said excitedly.

“A witness?” Jon’s voice came in inquisitively through the speaker of my headset.

“Get him! You know how I feel about witnesses…” Jonathan said. I could hear a smirk growing in size, even over my headset. I believe that his utterance gave birth to a shared memory… a memory of our dear mum.

“Yes… yes, I do… *chuckling* can’t have any witnesses, now can we…?” I heard a sudden crack of a gunshot pierce through the headset;

“Got em. Not today, witness… not today.” Both Jon and I had disintegrated into a resplendent laughter.

My mother was a wonderful and complex woman. She could be as loving as she could be insidious. On a warm Spring day many years back, I received a phone call while in class. This was before the time of ubiquitous cellphone use, so this demanded that I stand at the front of the class and speak into the phone atop of the teacher’s desk. An old rotary-styled windup. I stood awkwardly at the head of the room, feeling the questioning gapes of my peers, slither along my skin. I barely had a chance to say hello before my mother had erupted into frantic oration.

“You’re not to speak with your brothers… they are getting arrested. I’m having them thrown in jail!”

“Stay at school. But you’re not to speak with them anymore… you understand? They tried to steal from me, but I bloody-well showed them! Don’t mess with Joan!”

“Mum…” before I could say anything else, the phone went dead… she was finished. So many questions began circulating through my thinking space. I slowly lowered the receiver and somewhere along the short walk back to my desk, I had decided that I was absolutely not staying in class, nor at school. I grabbed my belongings, ignoring the pressing calls from my teacher, and walked out.

School was not scheduled to end for another couple of hours, so I was left with no other mode of transportation other than my two feet… so, I started walking. The distance from the school to my place was rather lengthy—likely more-so in memory than actuality—but lengthy all the same. This allowed for plenty of hyperbolic theories to fornicate and multiply within my mind.

My family life was… tumultuous, to state it mildly. My brothers were not criminals, though, so hearing that they were headed to jail left me with an incredulous sense of worry. What had they done? What could they possibly have done to cause the involvement of the police? It’s not that police happenings were totally foreign to our family… but they were not mainstays, either.

I walked with quickened pace, wiping the increasing sweat from my brow as I navigated the hilly landscape from school to home. Birds were chirping… if you ask me, I think they were gossiping.

I practiced a quick apology for leaving school early. I knew that with my mother’s elevated state, I could blame both her and the old phone to make it seem as though I had heard: “Matthew… come home,” that was my plan. It worked, too. I walked into the house, dropped my alibi and pressed for answers. My mother spoke in short bursts. Terse verbalizations of my brothers and their fiendish ways. None of what she said cleared anything up for me… so, I made it seem as though I was going to my room and instead went to my brother’s.

“Hey…” He was packing. Packing everything in his room as though he had just found out that he had been drafted into the war and had to report to Saigon by nightfall.

“Yeah… did that… apparently, you’re an asshole… which I do not think is true or punishable by imprisonment, so…”

“Well, she thought Shaun and I were stealing the computer… the one I paid for… so, when I touched it, she flew off the…” as he was explaining the reality of what was happening, his door exploded open with a thunderous wallop against the inside wall. Stood at the entryway was my mother and a rather timid looking neighbour of ours. Truth be told, I think she and I shared the same expression.

“Look here… I brought a witness… A WITNESS, SEE. You are NOT to touch the computer… you pack your stuff and you bugger-off!” My mother vituperated in the same manner that she would when yelling at her beloved shows.

“A witness…?” My brother said… with a growing smirk…

“Yeah… a bloody witness… don’t you mess with me, boy… I’ll take you down a peg or two.”

“Cool… is she here to watch me pack… help, maybe?” The smirk intensified.

“No, she’s bloody not! She’s here to see that I told you the computer is mine… you’re not to touch it. That’s the law!!! Right…?” My mother cast a gaze towards Pat, our neighbour… the witness. Pat’s eyes were rounded and deadpan. Which was shocking because she is of Asian descent… my mother had shocked her into complete saucer gaze! Her naturally olive skin even began to resemble that or finely made porcelain.

“The computer is MINE!” My mother’s voice boomed.

“Mm’k. See ya. Thanks, Pat… for witnessing my ginch, appreciate it.”

Jon’s voice cracked in through the speaker once more, whispered in a trenchant pitch: “Fuckin witnesses…” A second of silence… then… full blown laughter, shared by us both.

For years The Witness was a running joke between he and I. I guess it remains so today.

Jon and our mum would reconnect some time later. Like I said, my mum was a complex lady… though definitely NOT a lawyer. It’s nice to be able to reminisce on something that is not objectively funny, yet as since become so. Any memory of our mum that brings about a smile is a welcomed one. 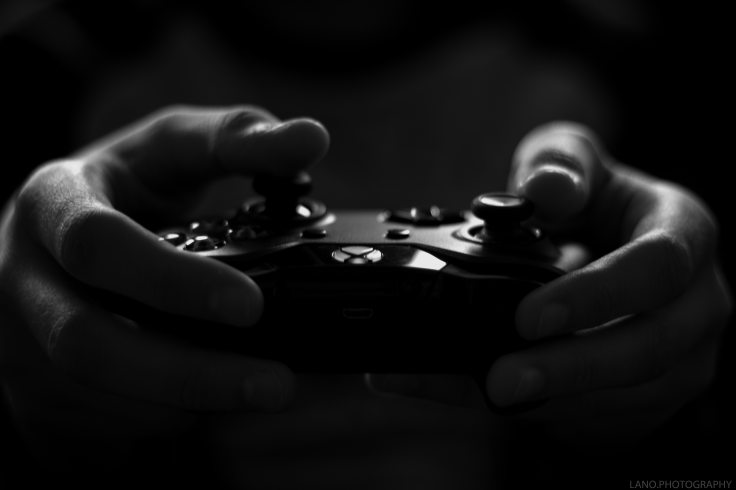