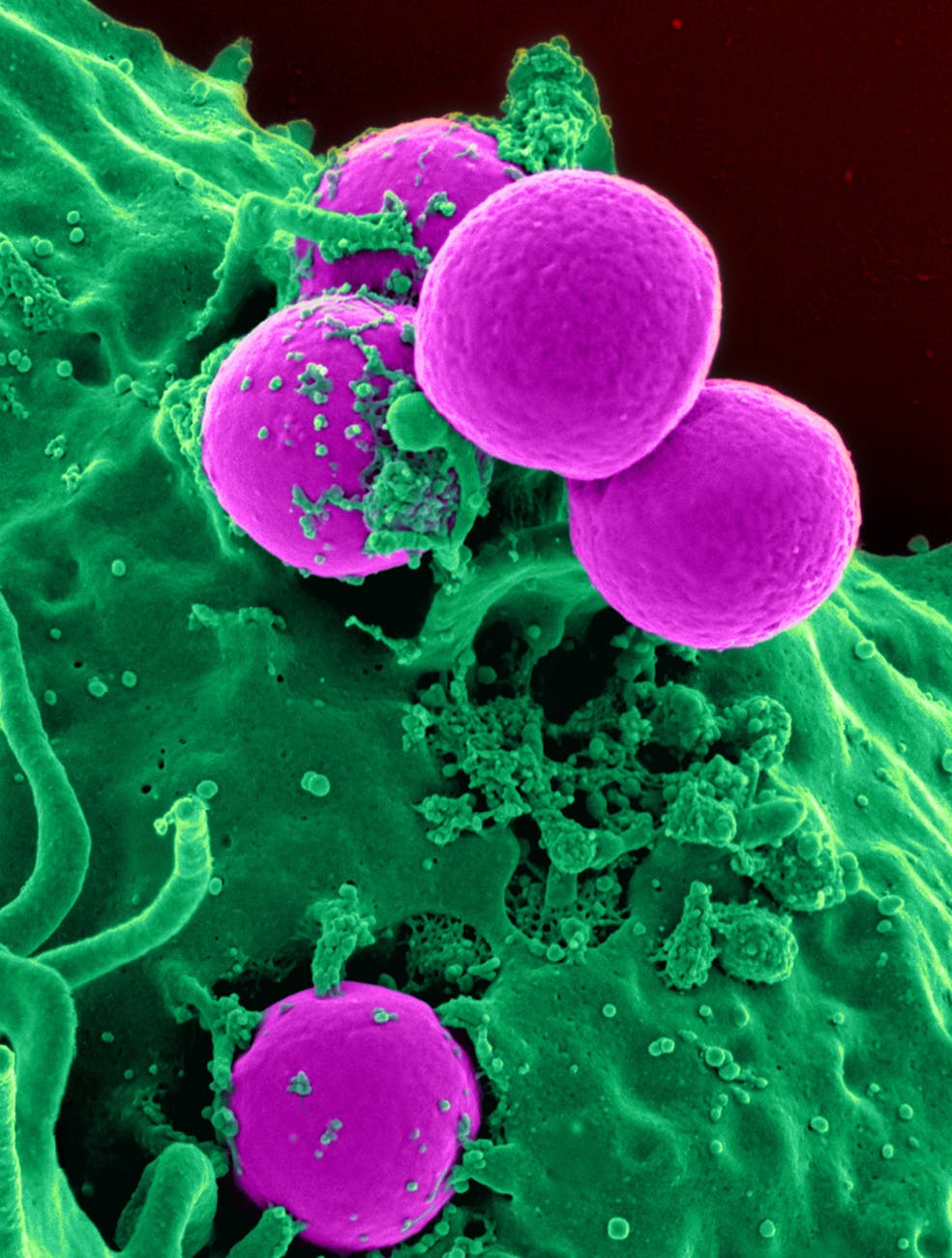 Things had been crazy ever since the outbreak. The hours at work had been long and exhaustive. When I got home, I dropped my kit bag and went for the shower. I stood beneath the decalescent beams of water, struggling to cleanse myself of last night’s shift. My arms outstretched, supporting the weight of my aching body as it leaned against the damp tile. Rivulets of water descended along my skin before vanishing with a gurgle through the perforated holes of the drain.

The orchestra of falling water was music to my tired ears. Anything to drown out the ghostly moans and ululations of the sick and wounded. As a paramedic, I’m not sure that’s a sound that you ever get used to… just frightfully acquainted with.

The shift started is it so often had during that past month—arduous checklists ensuring that our infection control kits were well stocked and easily deployable. For the past while, every call that came into 9-1-1 with a chief complaint of cough, cold or sniffle was equated to the virus. As such, we (the paramedics, or “ditch doctors”) had to suffer our way through donning oversized yellow gowns, surgical shields and N95 face masks, all while carrying the cumbersome weight of our everyday gear into the unknown of someone’s home.

The virus was no joke. Plastered all over the news were pleas from medical figureheads, decrying visits to the hospital unless absolutely necessary. People were panicked and mostly chose to stay in their homes. But when they became sick with anything even tangentially resembling that of the fabled sickness, they called us… 9-1-1. I guess we’re expendable. Or, as we were so often told: They “paid” their taxes.

It was during those diseased months that I became sure of one thing: should there ever be a zombie apocalypse, paramedics are no doubt going to be the first to go down. Why? Because some shithead zombie will still find a way to call an ambulance and then have the audacity to bite the responding medic. We would walk into these people’s homes and they would cough throaty heaps of lung butter all over our chin and cheeks as though we were somehow impervious to the ill-will of the virus. They didn’t give a flying fuck about possibly infecting us with whatever it was that they may or may not have had, they just demanded that we make them feel better. An impossible ask, but one they foisted with indefatigable zeal.

Despite wearing thick layers of protection, fatigue had made my patience run… a little thin. Frank and I were standing outside of the ambulance, dressing ourselves in isolation gear before making entry into a home that had requested an ambulance. A nearby construction worker witnessed the two of us dancing in place while getting geared up. Instead of letting loose a cat-call, he yelled out while holding his finger in an exaggerative manner, “Hey… fellas, I got a sliver. Can you come suck it out?” Followed by a juvenile laugh. He was looking to his buddies for support in his idiocy. Ordinarily I would have paid this no attention… but considering my current state of prostration, I hocked a reply to his query… “Nah, sorry dude. I’m not allowed to examine vaginas!” His buddies were now laughing.

Frank and I went into the home and completed the call. In and out, dress up, dress down… this was the cadence of our shift. It had been for the past several weeks in a row. Hospitals were crowded. Patients were coughing and spitting all over the hallway floors of the emergency department. Some people were more ill with incredulity than they were with anything else; they felt that calling an ambulance (warranted or not), meant that they should be seen ahead of anyone else in line. People don’t seem to realize that getting to the hospital is not a race. That the hierarchy is less about entitlement and solely about severity. Simply demanding that you be seen does not further you ahead in line. Nor in our good graces.

It was during a feeble attempt at getting coffee when the call came in. The radio squawked to life with news of a patient in dire straits. A middle-aged woman had collapsed outside of her home after being dropped off by a taxi. Frank and I looked at one another through tired gape. Without looking, he allowed his hand to navigate downward and flipped the switches to the emergency lights and sirens. Away we went. Frank drove and I studied and cleared intersections for him. A constant obstacle course of apathetic drivers and indolent pedestrians always made hot runs just that much more stressful. The excitement of riding hot to a call wears off rather quickly after you’ve experienced the dangers within once or twice.

The sun was going down and the temperature outside was beginning to reflect that of a flameless sky. When we got to scene, the first thing to greet my eyes was a hefty body lain on the craggy snowscape of the curb. The second, was scared stiff taxi driver, frantically waving at us as we approached. Frank and I got out and went to work. A battle had commenced. In one corner stood, the Reaper. Clad in a flowing gown of black and ominous shadow. And in the other, Frank and myself. Paramedics always fight outside of their weight class. Sometimes as the victor. Sometimes not. That night, we were bested by the demon and his sickle. The woman died.

We chalked it up to her having been grossly overweight. We felt as though we had done all we could, but that battle was not ours to win… apparently.

The shift would end and I would lumber home. By the time I had unlocked my front door, my girlfriend had already left for work. She was on days and I was on nights. The only intimacy that we could share with one another during that time was in the form of lingering scents that subtly clung to the others’ pillow case. This is romance in the world of being a first responder. Sometimes, the love of your life is invisible—at times, both emotionally and physically.

I would close my eyes and manage to catch a few restless hours before heading back into work. Last shift and then finally, some days off.

Upon getting to work, my eyes had finally started to open. I swiped my badge along the magnetic lock and listened for the latch to snap back before entering the ambulance station. I walked down the hallway and into the crew kitchen. The place was a ghost town, which meant one of two things: 1; the city was on fire and every ambulance was out on a call. Or 2; the zombies had finally gotten to us.

I heard the supervisors’ door open and out came the dayshift sup. I met him with a sarcastic outburst at the sight of his attire—he was fully gowned up!

“Hey… Dustin Hoffman from Outbreak; where the fuck’s the monkey?!”

“Were you and Frank wearing your Iso-gear during that call?”

“No… we just ran it like a code. No one said shit to us about her being sick”.

“Yeah… labs came back… that’s why she coded”.

“No… I mean, probably not. But you and Frank are now to be quarantined. Since you’re both out of this station tonight, we are shutting this place down and you and Frank are sequestered to the lounge until we figure out what’s going on”.

“I know. Look, even the doc thinks that you’re likely fine, but we have to follow protocol on this. I’m sorry”.

And just like that, the zombies had got me… me and Frank.

Frank had his fortune told to him as he arrived through the doors just as I had done. His reaction was nicer than mine… he’s a better man than I am. He sat beside me on the couch and offered me some M&M’s. I wasn’t hungry… but they were the peanut kind… so I took a handful.

Throughout the night we had to take each others’ temperature and report hourly to the shift supervisor. No other crews were allowed to rotate through the station. I knew that we were likely to be alright, but I would be lying if I didn’t admit to feeling a slight gnaw of concern at this whole thing. We were just out doing our jobs, and now we could be really sick. I’d be disingenuous if I said I wasn’t frustrated either. Sitting stationary in the blandness of an ambulance station for 14-hours makes for a long, sluggish evening. The highlight came when Frank called to inform his wife of what was going on…

(incomprehensible sounds from the phone)

(Loud and frightened incomprehensible sounds from the phone)

“Bah, nothing to worry about—Matty said he’d suck the poison out for me…”

“Sure thing, brother… I’ll get the tweezers!”

Frank finished his call and put his wife’s mind at ease.

The night would come and go. Frank and I would be given the all clear with the caveat of monitoring our temperature over the next several days. We would be fine. Unscathed, as you say.

I bring this up because of current global situation; we currently have men and women on the frontline facing a foe of unknown potency. Men and women who have families, lives and loved ones. Men and women who willfully charge into the mouth of the beast while the rest of us seek refuge. I remember what it was like working during an epidemic. It makes an already stressful job just that much more complex and difficult. And you wanna hear something really fucked up…? I really miss being there. Right there at the precipice of chaos. Takes a rare breed to want to do something like that. Takes an even rarer kind to continue doing it day in and day out.

So, to all of you that are out there now, facing off with adversaries well above your weight class, I salute you. Come home safe. Come home healthy. And come home proud… we love you!

One thought on “The Virus”