August… a month that holds diverse meaning. To some, it marks the countdown to the return of scholastic responsibilities. To others, the impending end of summer sun, with the promise of cold days to come. The inescapable truth about this sequential group of dwindling days, is that no matter what it means to you or I, both the beginning and the end and everything in-between are unavoidable.

For me, the long days and endless nights of August are rife with ghosts, echoes of time. A somewhat superfluous proclamation to any who have read my musings before; truth be told, there is not a lot that doesn’t conjure the aching remnants of my past. But with that being said, August is a rose with a particular thorn of remembrance for me. A cluster of days that have shook and shaped the very foundation of who I am. And as I sit here writing this, my eyes track to the calendar, examining the numbers attached to days and my pulse begins to quicken. Though they are just days, many years ago, they were painful moments of lived experience that have since felt no further than a blink away from me.

I’ll start with the bar; a bedim hole in the wall, accented by senescent wooden chairs and crooked floor planks stained in spilled drink and dirty mop water. A place sort of out of touch with time. It held modern drink, but everything else had ceased to evolve into present times. This was fine by me, because I wanted to remain invisible. I felt that if the bar failed to care enough to update, then it likely cared little for who its patrons were, as long as the money was good.

The heft of the day and its happenings lay heavy on my crown, forcing a downward slump of both gaze and posture. All I need do was raise my glass, cast an ephemeral gaze over to the barkeep, and a fresh pour was initiated. An alcoholic waltz that was practiced with great repetition throughout the night.

The old-style tube TV that boasted overhead from behind the bar began to flicker with images of frightful familiarity to me. The glow from its dust-laden screen pulled at my attention like the beam from a mothership. I watched as a newscaster solemnly spoke to the nation. At one point, the newscast broke away from the austere expression of the reporter and instead began relaying video of soldiers carrying a flag draped casket. The newsfeed at the bottom of the screen belted out: “FALLEN MEDIC, FIRST TO DIE IN COMBAT SINCE KOREA COMES HOME…”

The soldiers on screen, all young and unblemished of wrinkle, carried the remains of one of their own. One soldier on that screen demanded my attention. I squinted through the dim, dusty air of the bar in an attempt at bringing clarity to the television screen. I immediately began castigating the young soldier on display at current moment. Calling him a fool… a god damned fool. A failure and a fuckup! The mere sight of him made my blood boil. I was sickened, and not from drink—but from the piteous vision of that boy soldier. I hated him. Everything he did looked like a mistake. Each movement he made seemed just a fraction of a second behind the others when performing the funeral drill commands. I had to look away.

“Jesus… can you imagine? Awful… just awful.” A man leaning against the bar slurred. I took my attention away from the TV just long enough to ingest the sight of this bargoer; a working man, his clothes still marred by the stains of construction work. I answered his query, but not aloud… “yes… I can…”

I drank from my glass and tried focusing on the warm descent of liquor as it caressed the middle of my inner chest. Trying anything to rid myself of the heinous images of that specific soldier who tarnished the TV screen moments ago.

But sadly, for me, looking away did nothing in the way of providing respite. With my eyes bashfully lowered, that soldier’s likeness began to seep up from the wooden wrinkles of the bar, bleeding into focus. I could now make out his gangly appearance and uncoordinated movements. I closed my eyes with a tightness mimicking that of pain in hopes that this pathetic image would disappear… but it didn’t, it only intensified.

The likely reason for my inability to push this soldier’s features from my sight were perhaps due to the realization that I was that soldier. I was the gangly, uncoordinated wretch of a troop who shamefully bumbled his way through holding and carrying a fallen brother. All of it captured on live TV. No one else seemed to notice my shortcomings, but I did. And I hated myself for them.

“He deserved better than that… better than you… you’re pathetic.” I punched myself with these utterances with gloves off. No one watching the TV recognized me as being one of the pallbearers, I truly was invisible. Both to the patrons, and my own family…

Months before the death of my comrade, my mother had stopped speaking to me. She labelled me as “selfish,” and “a bastard.” I tried calling her numerous times in the lead up and follow through of my fallen brother’s death and return home from the battlefield, but to no avail. So, you see, invisible I was. Both in ways that I wanted, and ways I did not.

That same feeling of obscurity and isolation still haunts me to this day, especially throughout the wandering days of August. I am often alone in my grief, yet surrounded by normalcy. Normalities such as dinners with friends and loved ones, conversations with those who care for me, or even while I am sat across from my therapist, there are times when her words fall into mute as the sounds and smells of that day float into view. Sounds such as those that creeped forward from the stainless-steel casket once foisted on my shivering shoulders. Sounds like a grieving mother, father and brothers… his brothers…

On August 11th of 2006, Cpl. Andrew James Eykelenboom was killed in Afghanistan. A man of only 23 years. Slightly gangly himself, but not at all uncoordinated on the field of battle. Tales of his heroism and bravery have been gifted to us by those who were with him. His acts of selflessness were so abundant, that they even contributed to his very demise—Cpl. Eykelenboom, or, Boomer, as he was affectionately known by his comrades, volunteered for the mission that claimed his life, despite being told that he did not have to. His time on duty was done, but upon learning that a patrol was short a medic, he zealously and fearlessly insisted that he go. And so it was so…

Cpl. Andrew James Eykelenboom was killed near the town of Spin Boldak, in southern Afghanistan. A suicide bomber rammed his motorcycle into the side of the vehicle that Boomer was riding in, killing him instantly.

Mere days later, he arrived in Trenton Ontario, and I along with seven other of my mates carried his remains from plane, to hearse, and then eventually, to his final resting place in Comox BC.

The lads and I made an official yet unsanctioned pact after having carried Boomer the first time—to get absolutely, ludicrously drunk each and every time our hands touched that casket. And that’s exactly what we did. Over the next several days and burdensome hangover mornings, we carried Boomer from air to earth, all beneath the tearful gapes of his bereft family and friends.

I have told you about the bar, now let me tell you about the deck; it is 2020, and I am now stood on the deck of my girlfriend’s place in beautiful British Columbia Canada. I stand with hands leaning against the railing, glaring out at the rolling expanse of spruce and pine coated mountainsides, thinking on the haunting echo heard from inside the casket that day. A terrible rattling sound that now pierces me at random as we inch ever closer to the 11th day of August. Some fourteen years has done nothing but add bass and treble to the repugnant rattle. I hear it when I am asleep, when I wake and even now, here in this picturesque place… 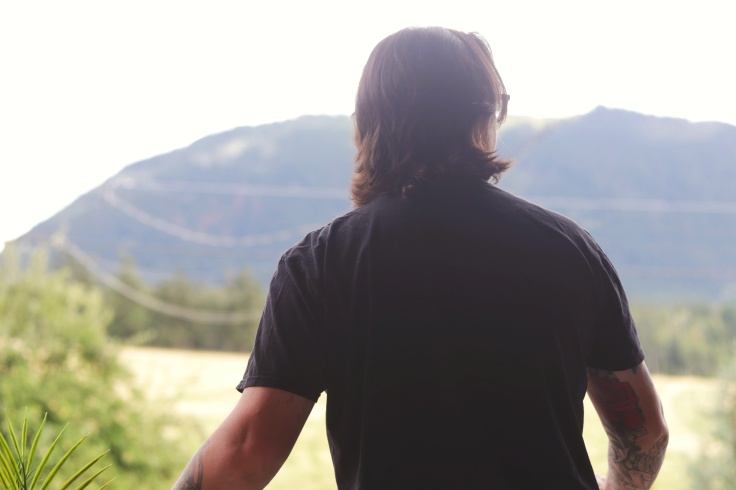 Another punitive sound comes to me here in this forested sanctuary, a familiar ridicule spoken from between my ears… “fool… a god damned fool. A failure and a fuckup!” I feel unworthy in my grief. It was not I who fought alongside Boomer, Boomer was not of my blood, and our kinship really only started at the time of his death. How dare I feel or struggle with anything? But I cannot help it… I hear it… I feel it… the weight of that casket on my shoulders, causing a dull ache to punish my muscles and mind.

I have however made a new pact, an official yet unsanctioned pact with myself, each time I carry that casket, from the past to the present, each time I am burdened by that loathsome heft of memory, I will… not… drink. I will not get absolutely, ludicrously drunk. Why? Because that version of myself has gone and died, too. That part of me was an anchor and not a helpful ally. Nor is it the best way for me to commemorate a man such as Boomer. Instead I have chosen to leave the macabre of dreary barrooms and use the gift of freedom and life that the likes of Boomer hath given me, and tell the world about him. On each passing anniversary, I will write about him. I will inform the world about him, but most of all… I will thank him… and wish him the most blissful slumber imaginable.

Hey, Boomer… thank you, brother. Perhaps the day will come when I can live the months of August without the burden of an ailing heart and aching mind, but until that day comes, I will remember you. Now, forever and always.

Rest in blissful peace, your time in chaos is done.

One thought on “August…”